Since 1983, the Paso Robles Police Department has maintained a K-9 Program as a supplemental resource to the Department’s Patrol section.

The K-9 Program was started with donations and fundraising events through the community and various service and civic groups. The initial fundraising and community support was enough to purchase (2) trained German Shepherd police service dogs and train them along with (2) police officer partners.

The K-9 teams are attached to Patrol section and are supervised by a Sergeant. The City adopted and has continued to fund the K-9 program since its inception and has purchased and trained replacement canines over the years. Our vendor and trainer throughout the years has been Witmer-Tyson Imports of Menlo Park.

The K-9 teams enhance the Department’s ability to respond to emergencies, particularly in the areas of Officer protection, tracking, building and area searches, apprehension of suspects and narcotics detection. Canines can perform searching, detection and apprehension functions more quickly, efficiently, and safely than officers on foot. The K-9 teams provide a significant resource to assist our personnel and other area law enforcement, in carrying out their duties, and this ultimately results in cost savings to the taxpayers.

Friends of the K9

In the early 1990s, the K-9 Program reached out to the community for support in an effort to cross train the dogs for drug detection work. A group of individuals and volunteers formed a group called "Friends of the K9" and began fundraising efforts within the community. During subsequent years, not only was enough money raised to support drug detection cross-training of one of the canines, but in 1997 enough was raised by the Friends of the K-9 to purchase a Black Labrador trained exclusively in drug detection and donate it to the Police Department. An officer was assigned and trained with the Labrador and this expanded the K-9 Program to three canine teams.

The K-9 teams are deployed on various patrol shifts and are also available for call out as necessary. The teams dedicate approximately 16 hours to monthly maintenance training to demonstrate ongoing proficiency in their work, but in reality, every day is training when working with police service dogs. Obedience is the most important aspect of training and is the foundation for the successful performance of the other skills required of police service dogs.

The K-9 Program continues to promote an atmosphere of community awareness and positive public relations through programs and K-9 demonstrations presented for groups, organizations and school children. This ongoing positive interaction with the youth and citizens of the community, coupled with their continued support and collaborative efforts, results in an effective and well maintained K-9 Program of which the community can be proud. Friends of the K-9 is a 501(c)3 non-profit group that continues to support the K-9 Program by donating training equipment and other items as needed, especially during times of budget constraints.

If you would like to have a K-9 demonstration for your group or would like to assist Friends of the K9 with their fundraising efforts, please contact the K-9 Program Supervisor, Sgt. Tod Rehner at 805-227-7496. 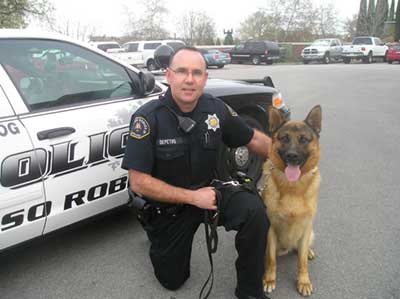 K-9 "Ir" is from the Czech Republic and began his career with the Paso Robles Police Department on March 27,2011. K-9 "Ir" is trained in protection, tracking, searching, apprehension and narcotics detection.

Officer Jeff DePetro has been with the Paso Robles Police department since September 2006. K-9 "Ir" is his first K-9.